I frequently hear people speak of their “sincerely held” beliefs. Sometimes they mean religious beliefs and sometime they are simply referring to their “sincere belief” that one route is faster than another. Whatever the case, sincerity of belief isn’t what matters. Truth matters. You have sincere beliefs, but are they true? 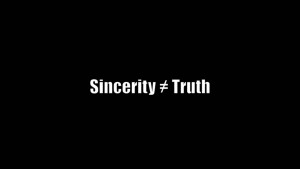 On July 23, 2015, the Indianapolis Star published an article with the following subtitle, “A Southern Indiana woman is suing the county and the county clerk for firing her after she refused to process same-sex couples’ application for marriage licenses because doing so goes against her “sincerely held” religious beliefs.”[1]

The article was mostly about gay rights and whether or not this lady had unlawfully discriminated. But there’s a deeper issue that needs to be explored. The lady did not say her religious beliefs were true, she just said they were “sincerely held”.

It’s good to be sincere in your beliefs, but if they are false, you should change! For most people, this is incredibly difficult. Unfortunately, mudslinging is the norm when discussing sincerely held beliefs, especially in religious and political matters. This problem actually compelled me to write a book on examining the truth of Christianity! (Planned release is December 1, you can get a free chapter download here).

It’s obvious that holding false beliefs is bad and will lead to big problems. But, how do we make sure our sincerely held beliefs are actually true? Let me suggest 4 simple steps:

Question: Which of the 4 suggested steps have you taken? How did it go?