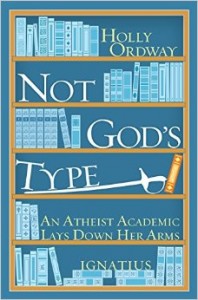 In her book, Not God’s Type, Dr. Holly Ordway chronicles her story of coming to faith in Jesus Christ. Surprisingly, Ordway marries her background as an English professor with her career as a competitive fencer to tell how she came to believe that there could be reason behind faith.

Not God’s Type accounts how Ordway became a hostile atheist in college and remained so until a failure to perform at an important fencing tournament as an adult began conversations with her fencing coach who eventually lead her to Christ.

I thoroughly enjoyed Ordway’s detailed telling of the “phrases” her coach was careful to use regarding God as they spoke of faith. She shares how even using the word “God” would have been offensive to her as she investigated His existence. To use the term would have implied that He existed. Instead, they used the term “First Cause” in their discussions, until Dr. Ordway gave Josh permission to use the word God. Josh’s sensitivity to where Holly was at as far as believing in God’s existence was both convicting and inspiring. She portrays his answers to her questions as both gentle and respectful – the epitome of how we should share Christ.

Ordway uses extensive quotes from literature throughout. Some I found beautiful and fitting, others I’m certain were both of those things – but I would only have gained that insight had I actually taken her class! So, I found myself at times skimming the quotes.

In the beginning of her story, Dr. Ordway shared about the imaginative literature she adored as a child and teen. She noted that “long before I considered questions of faith and practice, my imagination was being trained Christianly.” (p. 24) As a mom of two young daughters, I was struck at what an impact the Narnia stories and others like them had had on Ordway. This motivates me to make sure I’m at least attempting to feed my daughters’ imaginations “Christianly!”

I initially read the book in hopes to give it to a highly educated friend of mine who has no belief in the existence of God. I hoped that Ordway would connect her attitudes about God to the reason that led her to believe, leaving the unattractive “blindness” of faith behind. She definitely did this. And she did so beautifully. She zeroed in on the historicity of the resurrection of Jesus Christ with precision after reasoning out why it was acceptable to believe in a God in the first place.

After completing the book, I have decided that it is not the best book to share with my friend. In the last section of the book Ordway shares how her journey of faith has led her to the Catholic Church. In no way am I insinuating that some Catholics are not believers in Jesus Christ. Many religious people claim to have what they do not have – a living relationship with the God of the Bible. Ordway shares a lot of detail about Catholic doctrine and practice that are not taught in the Bible.

Ultimately, this book highlights the compatibility of faith with reason. Its shortcoming appears in the promotion of the Catholic views of Mary, prayers to the saints, and the Eucharist.

Overall, Not God’s Type was an engaging read that I very much enjoyed. Ordway makes much of the Resurrection of Christ- and without that we who believe are nothing and to be pitied above all men.

Every Day Is A Winding Road 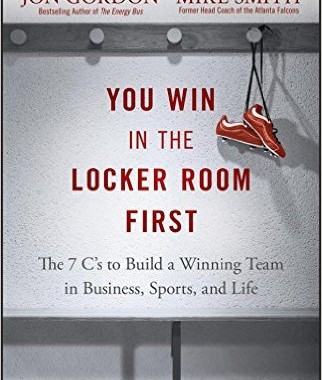 You Win in the Locker Room First: Book Review